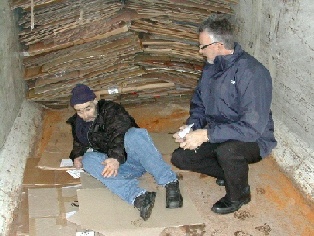 Over 6 years ago Harry was found living in a container at the back of a department store in the town centre; his whole life was chaotic - including his drug use.

This was partly because at the time, it was mainly other drug users who seemed prepared to look after Harry. Harry was hospitalised as a result of an assault including a blow to the head. This has left him disorientated with an acquired brain injury.

The Salvation Army KiP Project referred him to Maninplace who provided temporary accommodation. Harry has not used illegal drugs since and has reduced his methadone dose.

Whilst Harry has difficulty accepting anything new, his initial instinct is to refuse assistance and is negative. Given time and support, he thinks differently because he is extremely anxious both to please and not to put people out. He is not always aware if how he is effected by his brain injury and his mental health.

Though Harry appears sometimes to be much more capable than he actually is, the reality is his ability to cope is dependent on who is around him. Whilst still vulnerable to exploitation, the support Harry receives has had a positive influence on His life.

There have been no further accidental overdoses and Harry is now living long term with Maninplace and is experiencing a better quality of life.