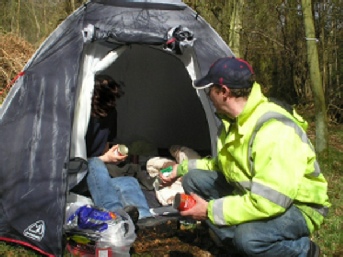 2009 was an eventful year in the life of 45 year old Peter Green: he was made redundant and got divorced!

In his own words, he then "lost six months", which he spent in Thailand. We understand that for some of the time there he taught English as a foreign language, but returned to the UK when funds were running low.

Back in Telford he had no Job and nowhere to live, and so ended up sleeping on the sofa at his brother's house, but he couldn't stay there for long and had to find his own accommodation.

The next day, we spoke to Peter by phone and invited him to come for an interview, as soon as he was able, so we could better understand his housing needs.

The interview was just five days later and offered a room in one of Maninplace’ shared houses.

That same day, Peter viewed the room and agreed that it was suitable.

Without work, Peter was on Jobseekers Allowance but he desperately wanted a job and applied himself diligently to the task.

In early June he was successful and started full-time work in a local manufacturing plant and thus he came off benefits and became self-supporting.

With assistance from Maninplace staff, a self contained flat was identified that suited Peter’s needs.  His working salary was just enough to cover his outgoings, and so moved in.  He continued to look for better paid work that would help him acquire a better standard of loving, but was delighted to be back on his feet again.